Despite increased competition in Abu Dhabi, Emirates Palace recorded a steady growth of 8.1 percentage points in overall occupancy compared to 2013, while the total revenue increased by 8.8 per cent.

Financial performance also improved in its newly rebranded Emirates Palace Spa, as well as its restaurants, cafés and banqueting services, which saw an overall increase of 11.8 per cent compared to the previous year.

“Emirates Palace remains one of the top performing hotels in Abu Dhabi and the region, and with the increased number of visitors to the UAE expected to rise over the next few years, we are looking forward to continued success,” said Holger Schroth, general manager of Emirates Palace.

Schroth added: “This would not have been possible without the support of the destination and all parties involved and, of course, the quality and attention to detail delivered by our team of professional hoteliers over the last year.”

Other important events contributing to the year’s success include the Virtuoso Chairman’s Event in November 2014, which attracted more than 80 top travel agents from the USA in an effort to increase interest in the destination.

A successful Festive Season also led to an excess of 5,000 daily visitors walking through the Palace throughout the month.

As a result, in December, Emirates Palace recorded the best monthly result ever since its inception in 2005. 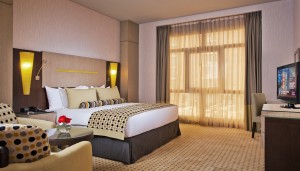